The basics of light and why you should choose LEDs

All electromagnetic (EM) waves are light, this includes radio waves, microwaves, Infrared, X-rays etc.  Visible light (the colours of the rainbow) sits between infrared and ultra-violet on the EM spectrum.  The wavelength of light determines its perceived colour, red having a longer wavelength than violet. 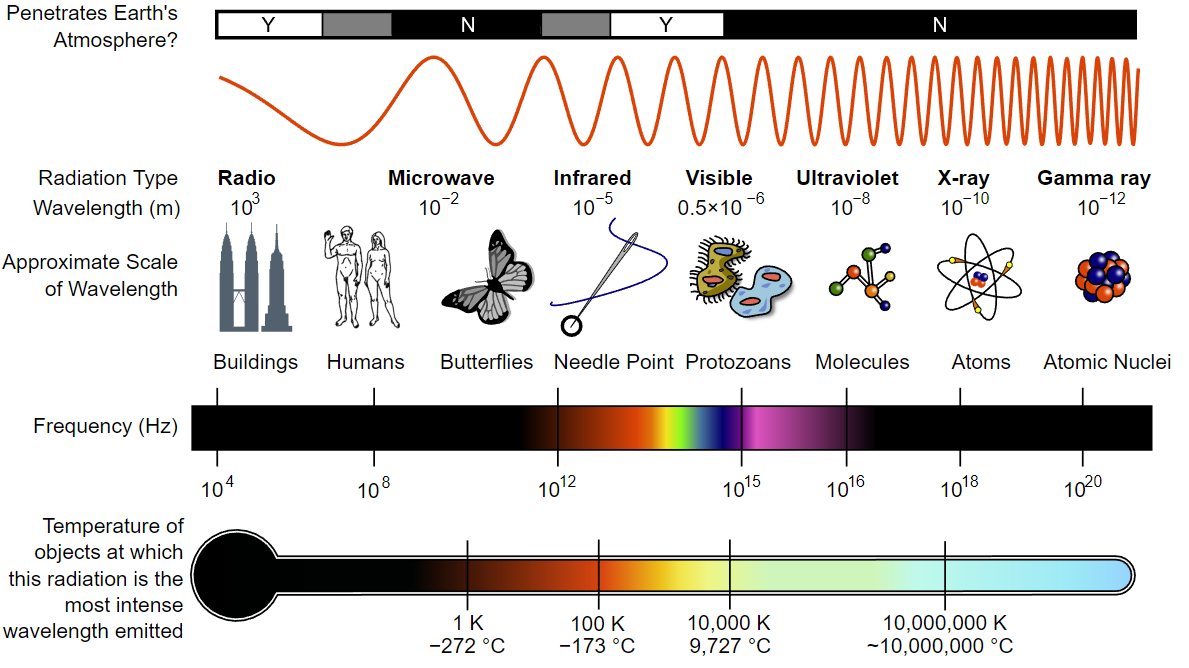 White light, as perceived by the human eye is composed of at least red, green and blue light mixed together.  Whether white light appears blueish (cool white) or yellow/reddish (warm white) is determined by the ratio of colours that make up the light (more red = warm, more blue = cold).  These qualitative names for light colour can be quantified by using colour temperature.

How do we measure light?

There are three key attributes of light;

Intensity (luminance and illuminance) - Intensity of visible light emitted from a light source is called luminance and is measured in Lumens; However, intensity of the same visible light as measured when it hits a surface is called illuminance and is measured in Lux (lx).  1lx is defined as 1 lumen spread over 1m2, for example a 15000 lumen high bay light illuminating a 10mx10m garage would give a lux level of 150lx assuming a perfect uniformity.  Illuminance levels as measure on a working plane in lux are the biggest  single factor when determining how well a given lighting system will perform - building codes will state a required lux level, but only rarely will they specify a CRI or CCT.  Simply put, you can't see without sufficient light.  Some examples of lux levels are a carpark at 20lx, typical office at 300lx, sports stadium with TV coverage at 2000lx and a bright sunny day at 200000lx(?).

Corelated Colour Temperature (CCT) When an object is heated it starts to glow, emitting light through a process called Incandescence.  The colour this object glows is directly related to its temperature, starting at a deep red and heading toward blue as the temperature rises.  This rule holds true whether we are talking about hot coals, a candle, a filament globe or even the Sun.  As such, if we know the temperature of an object we can state its colour, and if we know the colour of an object we can state its temperature.  This method of colour measurement, first used when filament bulbs were the predominant light source, once made perfect sense; the filament temperature directly determined the light colour.  Today LEDs and other light sources do not use incandescence to emit light, so are not actually glowing at this temperature, but we still use this correlated colour temperature to quantify the lights appearance.  Temperature is expressed in Kelvin (K), and as this value rises the light is getting more blue.  For example, 3000K is a yellow "warm" light, while 6000K is a blue "cool" light.  Note that "warm" and "cool" in this context describe how colour is traditionally perceived; yellow = fire = warm, blue = water = cold.  In reality, colour temperature works the opposite way.  Some examples are a candle at 1800K, incandescent bulb at 2700K and the Sun at 5600K

Colour Rendering Index (CRI) - The CRI refers to the "whiteness" of the light, how complete the light spectrum is when compared to the sensitivity of the human eye.   This is expressed as a score out of 100 and is measured using a special device that measures light components.  The sun is an example of a light source with a CRI of 100, while a sodium (yellow street light) lamp has a CRI of approximately 30.  Light sources with a high CRI make coloured objects appear as they would in direct sunlight, however low CRI sources can make it hard to distinguish between shades of the same colour or, in cases with very low CRI, between primary colours like blue and red.  Devices with a high CRI are typically less efficient than those with a lower CRI, so there is often a trade-off between colour reproduction and energy use.  As such, areas such as warehouses and car parks where colour isn't as important use lower CRI products, while areas such as showrooms and operating theatres where colour is critical sacrifice efficiency for quality of light.

The wattage of a product does not directly determine the light output, only what the luminaire / bulb draws from the electricity supply.  The reason many people correlate wattage with light output is because of the ubiquity of the incandescent bulb - all traditional bulbs have similar efficiency, so it made sense to only list the power draw specification on the product.  This is no longer the case and lumens output is the only method for determining light output.

How do we measure lighting efficiency?

What is an LED?

LED stands for Light Emitting Diode.  This is a device built using specially processed semiconductors to emit light when supplied an electric current.  LEDs can be built to output many different colours depending on the semiconductor material used to make them. For illumination typically we want white light, which can be achieved by using red green and blue LEDs together.   However, for efficiency reasons most white light devices for illumination are actually royal blue LEDs, built with a special yellow phosphor coating.  This coating takes some of the blue light and converts it to yellow light.  Yellow + Blue light = White light, as yellow light is actually comprised of red and green components giving the entire RGB compliment.  Varying compounds in the phosphor and different amounts of blue light absorbed give different colour temperature light.

LEDs typically have a much longer life than other technologies while also being considerably more efficient.  There are no bulbs to replace and the light beam of an LED based device is typically much cooler than an traditional sources as there is far less radiated energy in the beam.  Using less energy in an airconditioned environment saves energy twice as you now no longer need to cool the environment.  LEDs are instant-on devices and do not require a warm up or cycle period like other technologies.  They can be switched rapidly without ill effects.  LEDs are also relatively easy to dim, so even very large LED luminaires can be dimmed.

Why pick a particular colour temperature?

Colour temperature is typically a matter of personal preference.  However there are some technical reasons why you might pick one colour over another; For instance, you might use cooler temperatures for lighting a car park as the night vision part of our eyes is more sensitive to blue.  However, the opposite might be true in a bed room, where you want the calming qualities  of a warmer light.  There is also some research indicating that blue light may stimulate cells in the eye which affect circadian rhythm, leading to a trend to move toward warmer colours for public lighting.

Describe the difference between luminance and illuminance, use measurement units in your description.

What does CRI stand for?  What does it describe?

Would I use a high CRI light source in a car park?  Why?

What does LED stand for?  How do they produce light?

Give two reasons why LEDs are superior to legacy lighting technologies.

How is white light typically produced with an illumination LED product?

Other than energy efficiency, name two other benefits of LEDs over traditional lighting products.

Dean has 3 old 2000W lights he'd like to upgrade to LED.  He asks you for advice as to what he should replace it with - Has he supplied enough information?  What would you suggest he buy?

Sarah has a large warehouse fitted with 100 metal halide high bay lights in an industrial park at Mascot.  Unfortunately, Westconnex roadwork has been causing intermittent blackouts which only last a few seconds but are enough to knock out her lights for 10 minutes or more at a time.  She has been told this is a health and safety issue and needs a solution - How can you help?

Jason has a loungeroom with 20 halogen downlights.  They light the room just fine, but in summer he has to turn them off because the room gets too hot.  How can you help?

Danica is replacing existing fluorescent tubes in a car park with LED batten lights - What colour temperature would you suggest she use?  Why?